Not the most scintillating post name, I know, but you get what it says on the tin. 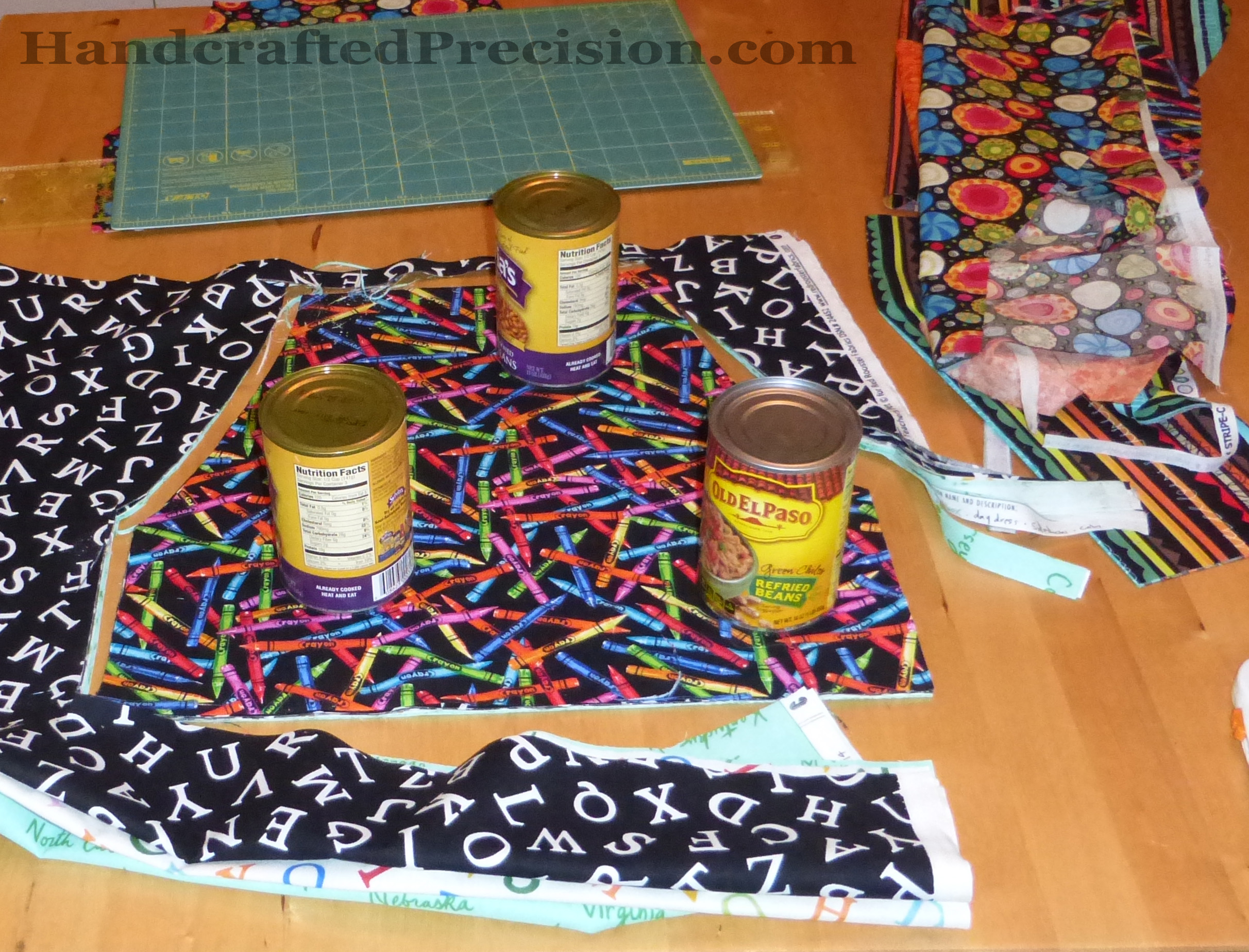 I finally got over my mental blocks and started cutting out all of the fabric I bought for toddler aprons.  It’s really too much and I’m going to have too many aprons at the end.  I figure I’ll send some to the kids’ old school and maybe keep a couple for the house, though I might need to modify one for my almost-four-year-old.  They’ll go over his head, but they won’t protect his trousers well.

Yes, I’m using cans of beans as pattern weights.  What of it?

I love all of these fabrics, except the one with the circles, but even it’s growing on me.  And I’ll have scraps of them all!  I probably shouldn’t get so excited about scraps, but it’s nice to come by some scraps in the usual way– that is, work on a project and have some fabric left over.  Revolutionary.

The crayon fabric is especially for my toddler who LOVES a shirt he has of a different crayon fabric, which I don’t think they make anymore.  One of those aprons is definitely going to his classroom. 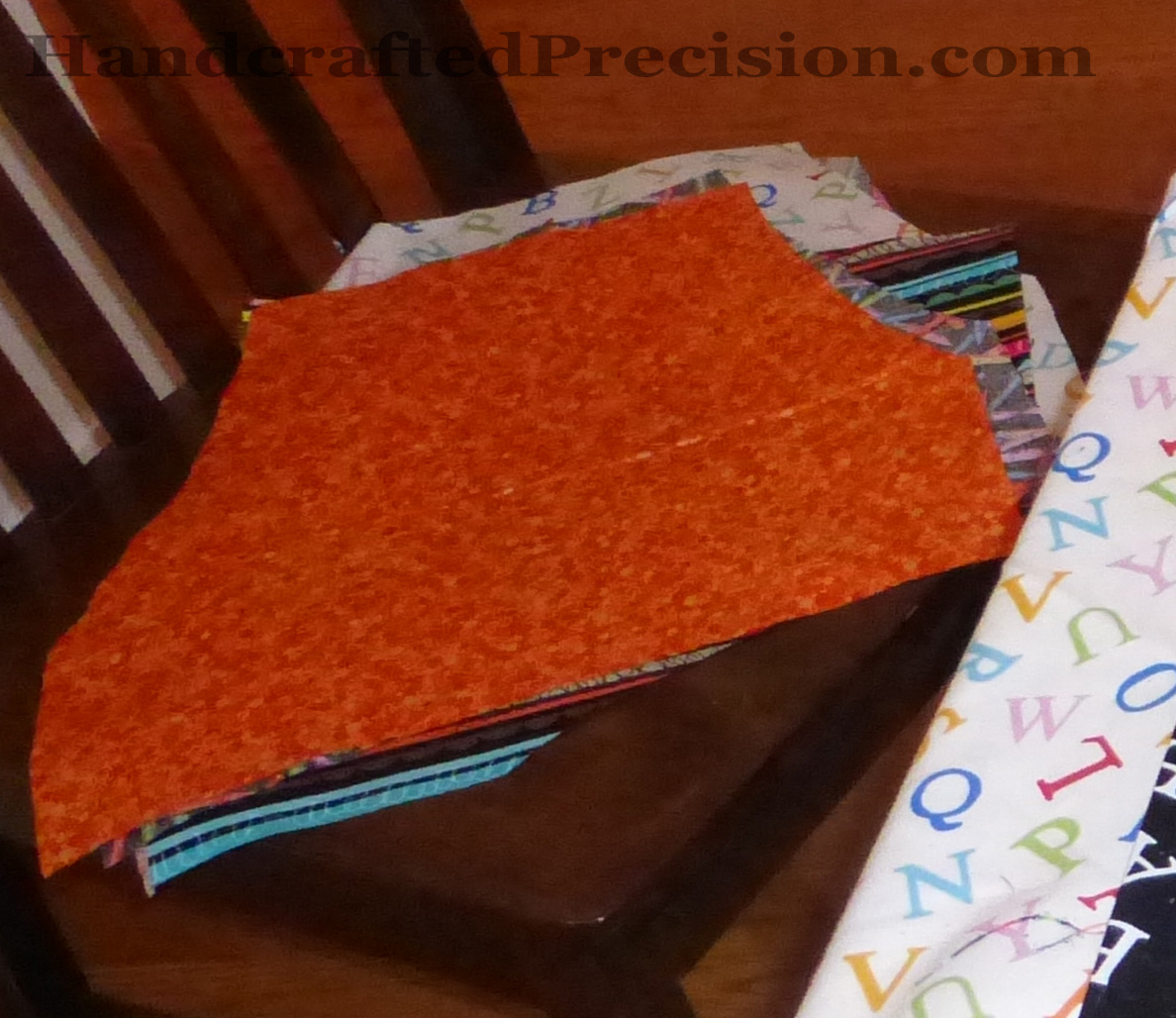 And a blurry picture of the stack of cut and paired pieces.  Now I need to motivate myself to iron the interfacing on.  That’s going to be at least an hour of wet, hot work.  The sewing should be quick after that.  (Famous last words.)

The scrap class was a lot of fun.  I had to attend with my baby, which was less fun, but he stayed quiet in his stroller through most of it.  Well, about half of it, but I’d not planned on staying the whole time anyway.  Kid’s gotta nap.

The instructor had scraps for us to use, so I didn’t have to buy and fabric, which was awesome.  I was there for all of the first project, which was sewing the 10″ blocks together around the perimeter, then cutting them into non-equal ninths, then opening them and pressing and flipping them into new combinations and sewing them back together.  I do’t have progress pictures, but here it is finished: 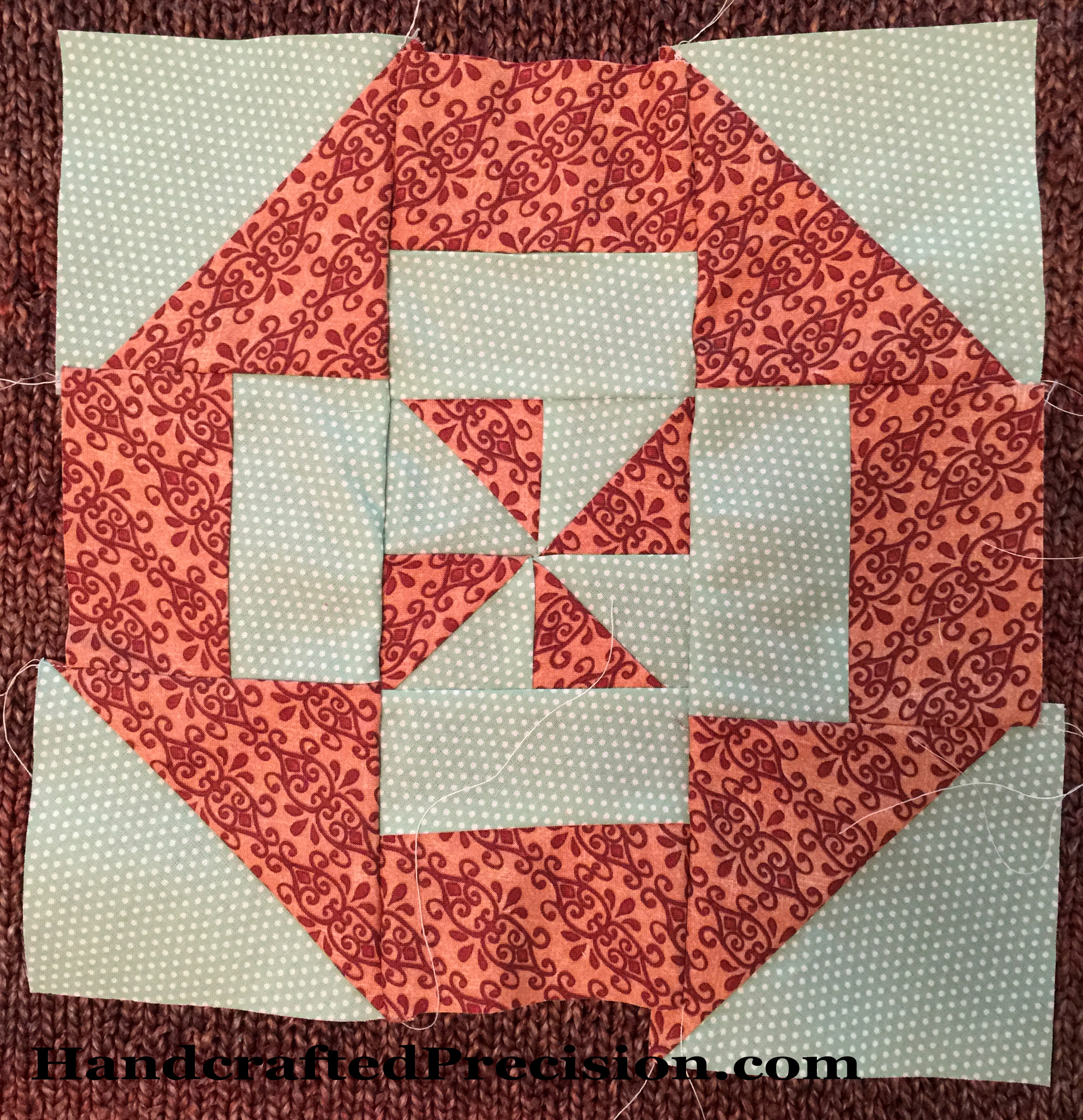 I learned that my seams are TERRIBLE.  Nothing matched.  I don’t think it’s the machine, but I can’t imagine it was me.  I was going super-slow and it should have worked.  I need to practice a lot more.  Here’s the back: 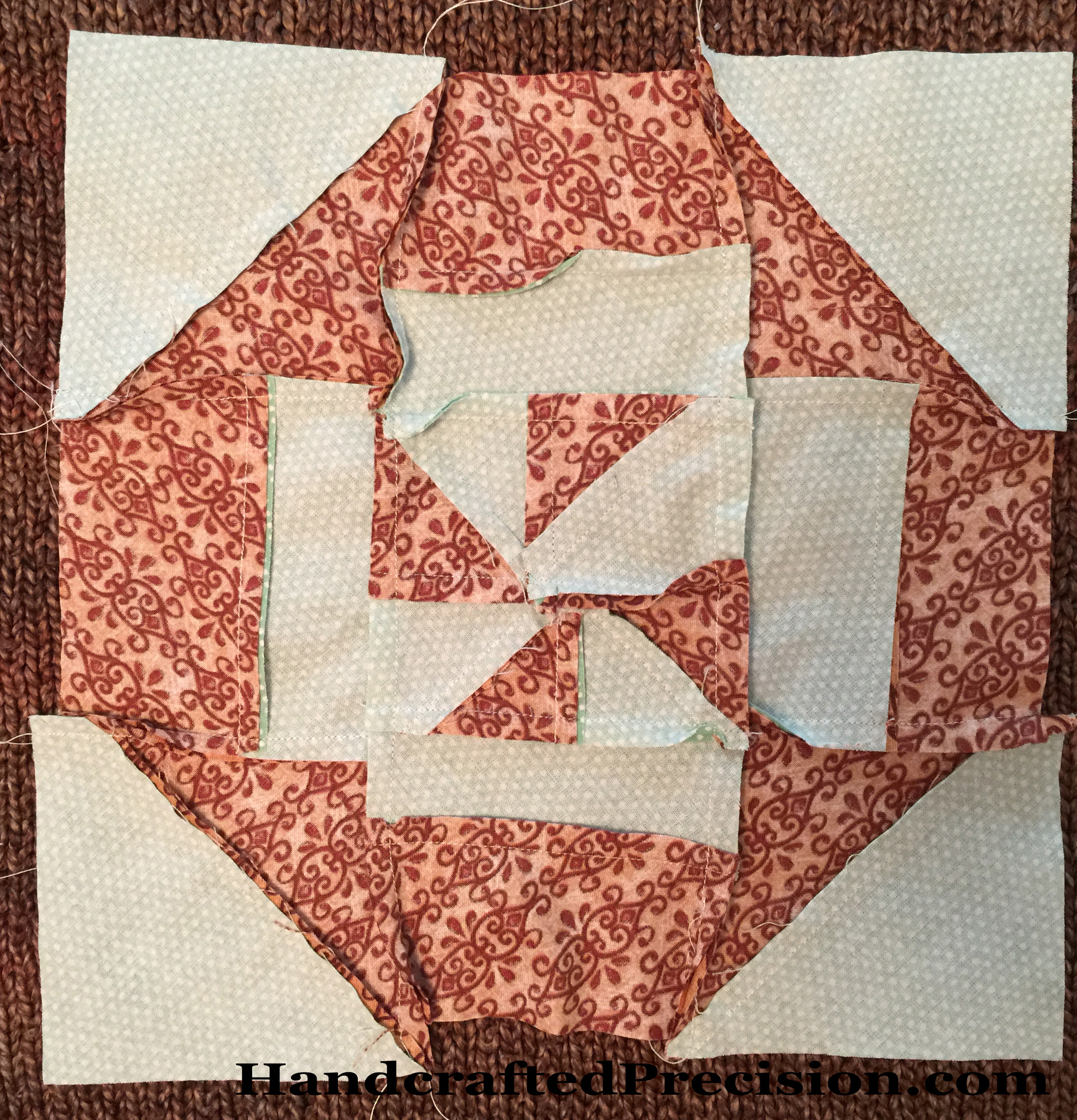 I got my second sewed together and immediately cut it wrong, which is a shame because I really like the fabrics.  I suppose I can cut it more and use the center pinwheel and the half-square triangles for something and the rest can go in my scrap bin. 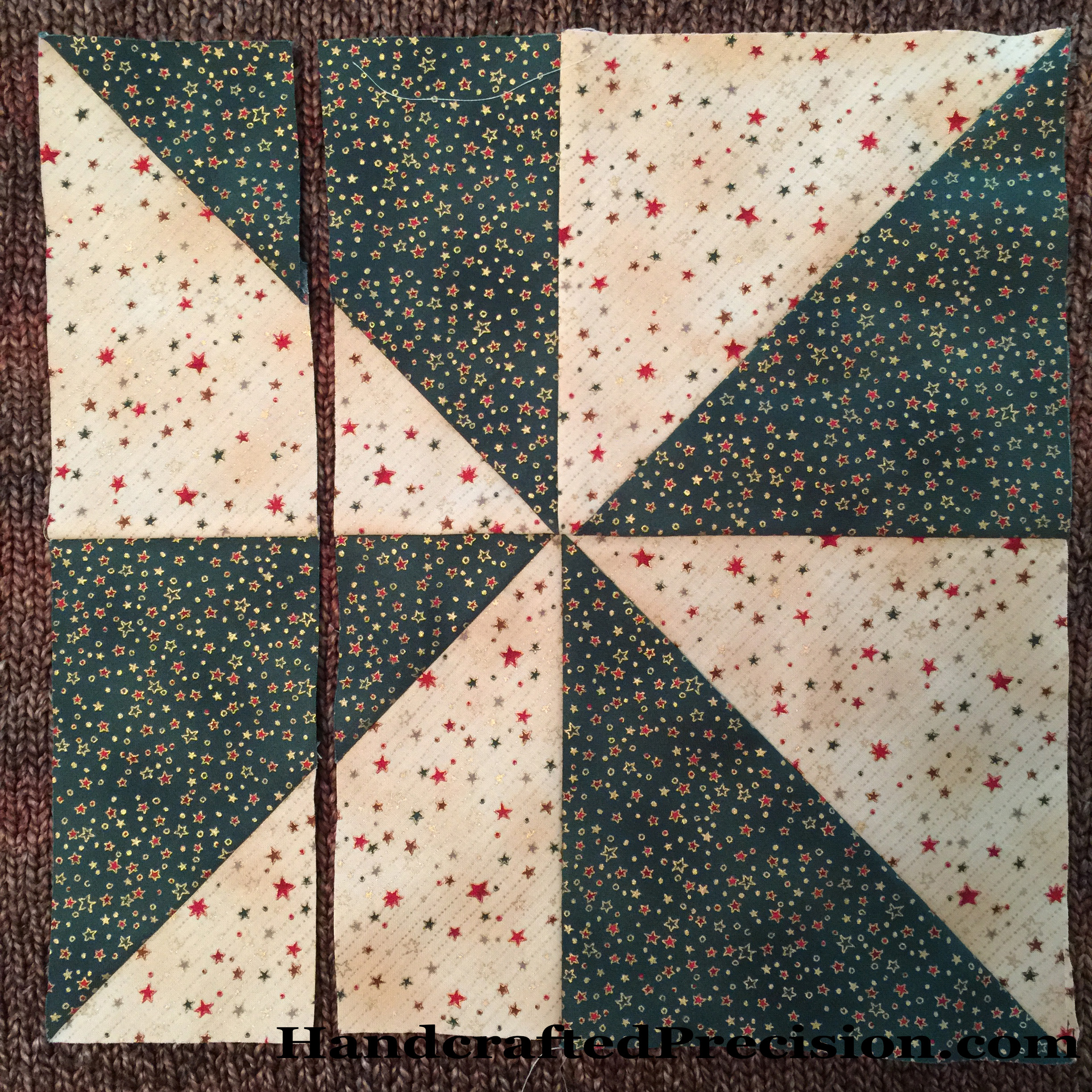 The instructor told me to dip back into her scrap piles and try to make another block.  I managed to measure right this time for the cutting, but my seams were still awful. 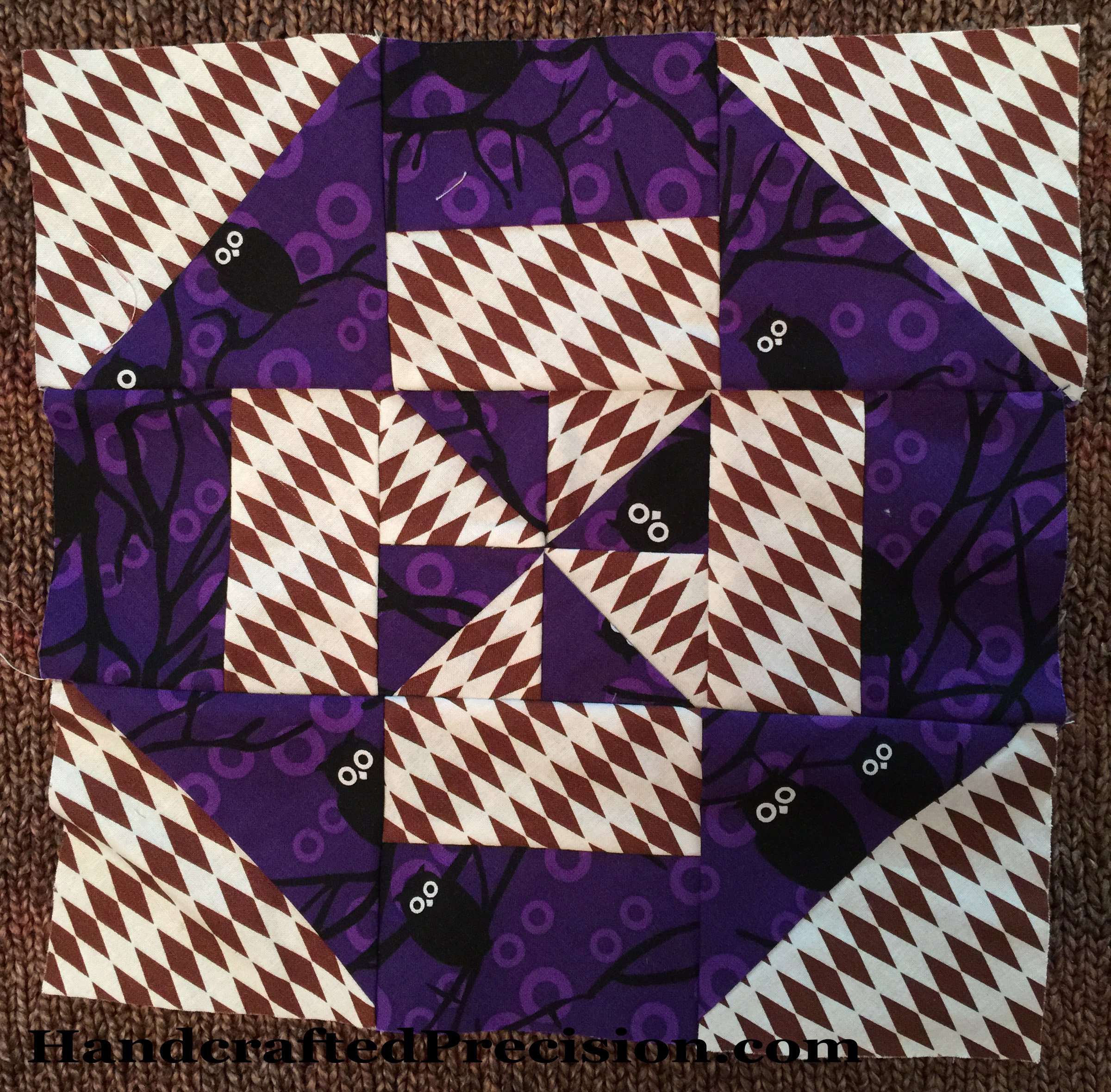 I have a picture of the back, but I’ll spare you.  I chose fabrics I thought Prim would like, but I have no idea how to use this in anything, short of cutting it up and salvaging the owl on the bottom right.  I guess these two blocks will form the beginning of the “orphan blocks” pile.

The second project was English Paper Piecing.  She gave us each a 3″ paper hexagon (3″ for one side, 6″ from point to point) and some fabric to loop over the shape and baste closed through the paper.  Then we were supposed to sew them together on one edge to make a needle book (or something? I dunno).  I had to leave before really working on this, but I did take some very cool fabrics and cut them to size.  Who has time for hand sewing anyway? 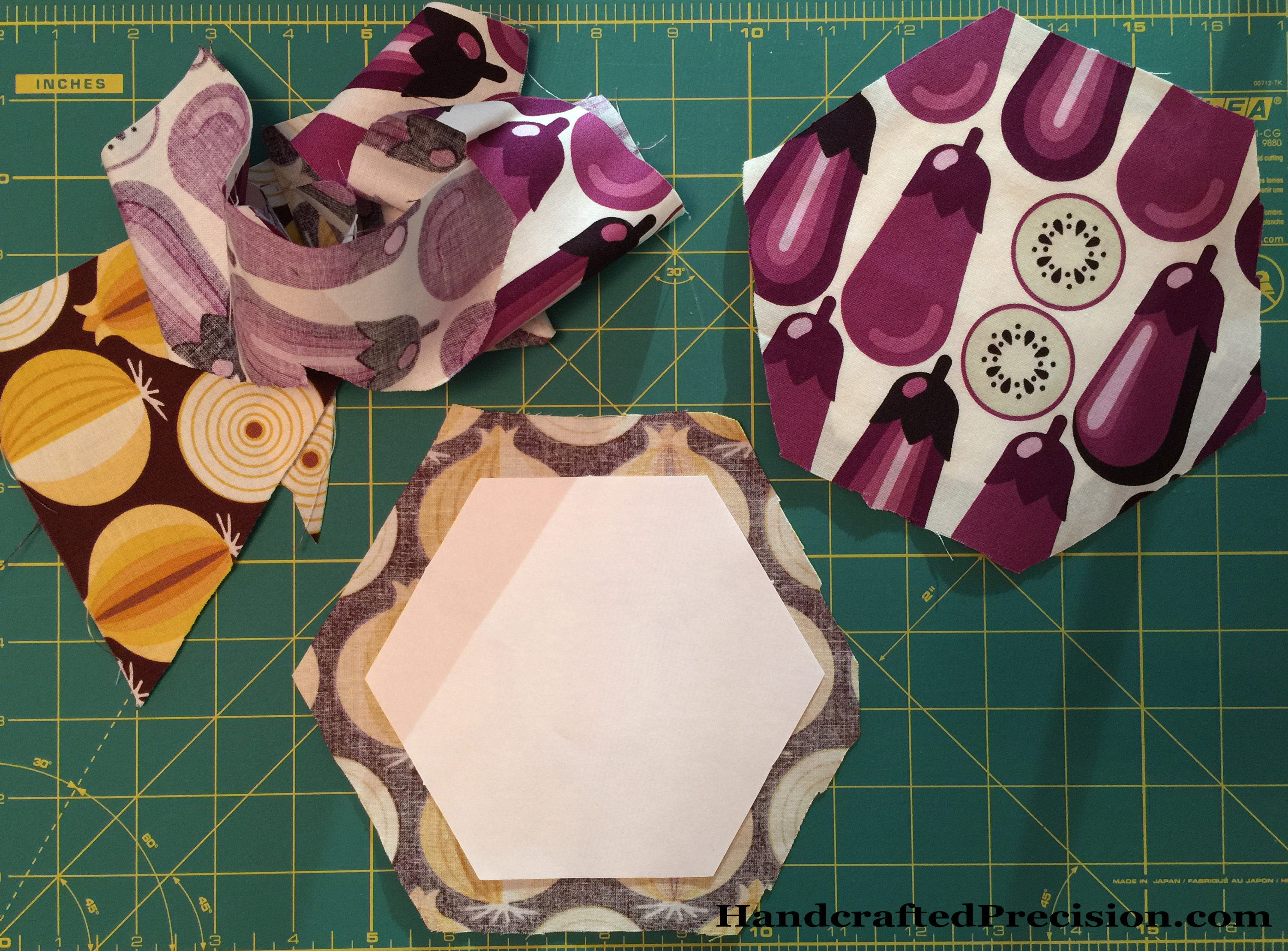 And if I really wanted to make a needle book, I’d make it more like a rectangular book so it would be more stable.

See, super-cool fabrics.  Now I’m thinking I need to use them for something and they’re already cut so much that if I cut them more, I’ll lose the interplay of shapes in the fabrics.  <sigh>  Well, these’ll go in my “I just don’t know and even if I did, I need more skills” pile.  I have a feeling a lot of things from this class are going to end up in that pile. 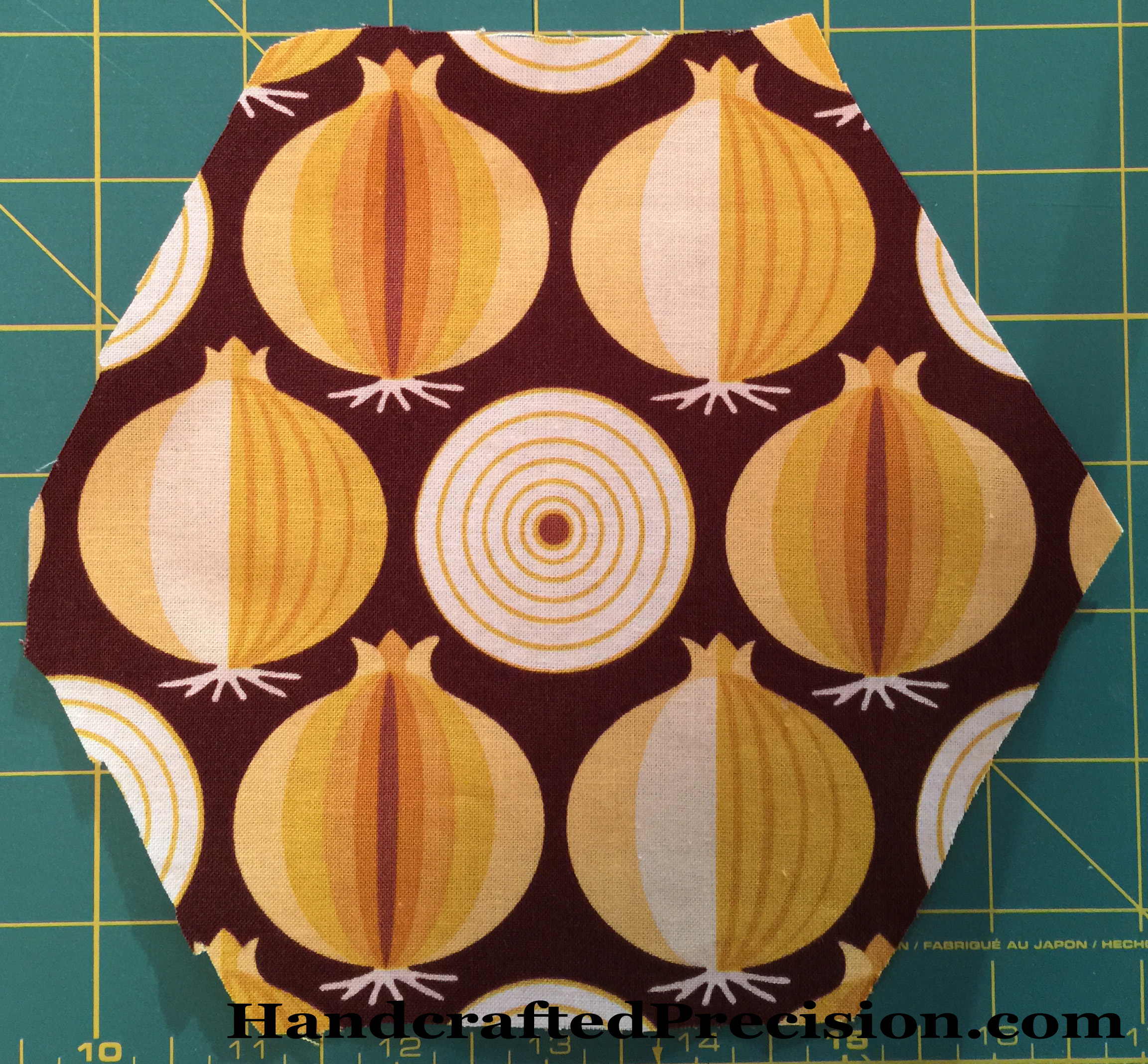 I’ve been thinking about quilting all week, but I made myself shorten the strap of the toddler apron I made, as well as the existing ones in the classroom.  The teacher said they were all too long and I wanted her to have useful aprons while I worked on the new ones.  I couldn’t bring myself to do all of the cutting and ironing-on of interfacing.  Bleh, ironing, especially with a damp pressing cloth.

The strap fixes turned out okay except for the one where I cut the diagonal wrong.  (See?  I’ll need that skill for binding my future quilts.)  But I patched it with a different print and it’s not too bad.

I felt bad about it since the one I messed up was one of the ones from the classroom, not the one I made.  But I fixed it and it’s a Montessori classroom, so they’re all about making mistakes and learning and fixing. 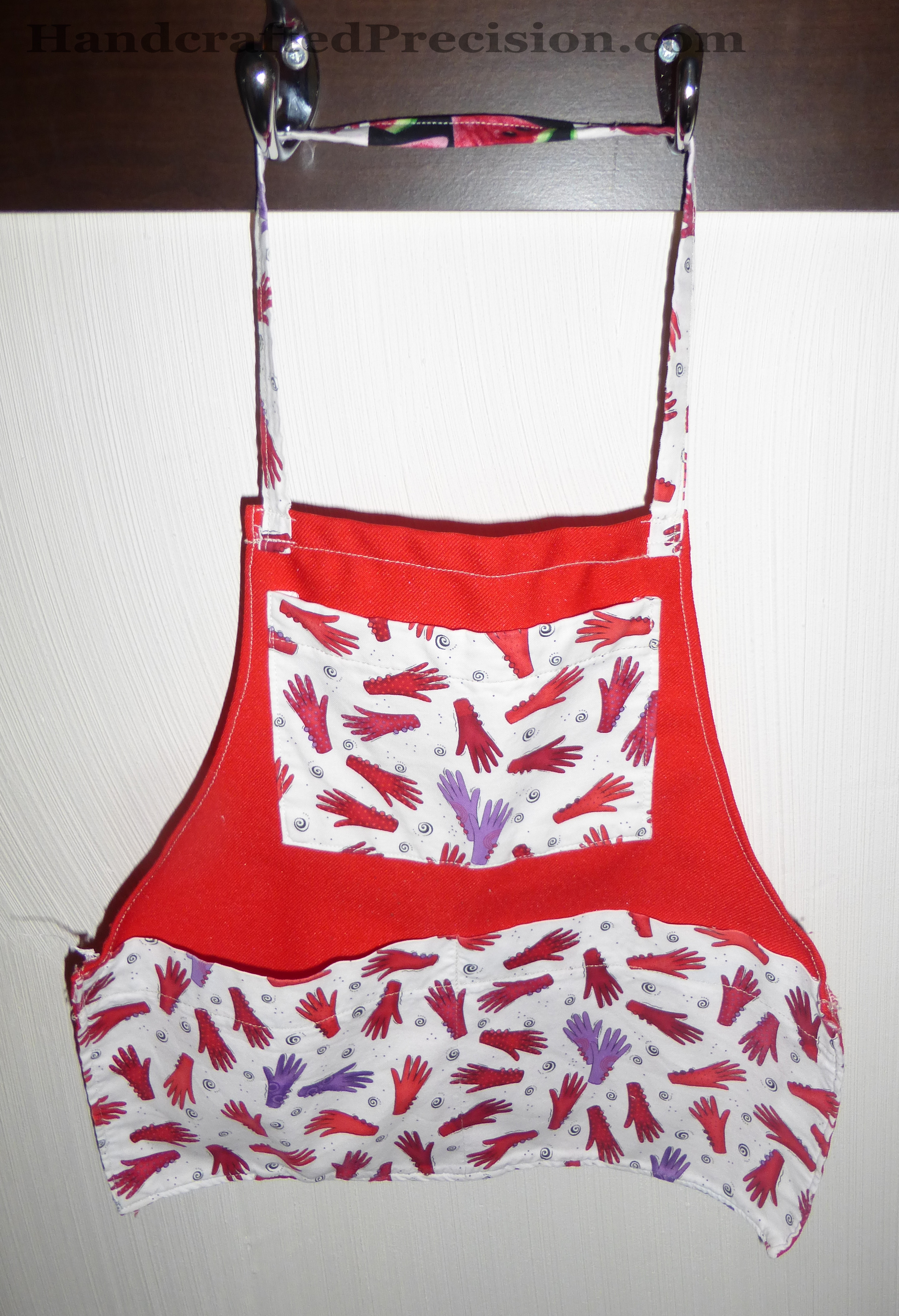 Maybe it’s even a little fun?  I went for a contrasting fabric on purpose since there was no disguising what had happened.

You’ll note the pockets on this apron.  The teacher said they weren’t necessary on the ones I made, so the project became that much easier for me.  She said what I thought, that the kids just filled them with dirt and random stuff and they caused more harm than good.

Anyhow, this part is done.

I’m searching for scraps.  I wish I had sewing/crafting friends.  I signed up to take a “Scrap Quilt” class at the local quilt shop, so maybe they’ll have some leads on scraps.  I feel kind of silly buying fabric for a scrap class, but I’m going to have to.  They said to bring 10″ squares for the first class.  I don’t think a 10″ square is a scrap, but to each her own.

Well, the apron strap was too long and I’m working on fixing it (and the straps of the rest of the toddler aprons already in the classroom), but I don’t want to talk about that today.

I want to talk about inspiration.

I’ve been following a bunch of quilting blogs all summer (using NewBlur as my RSS aggregator because it’s awesome–I’m glad Google Reader closed down), adding new ones as I find them through links on those blogs or link parties or what-have-you.

I’m especially drawn to rainbow and scrap projects, especially scrappy rainbows, so I’ve thoroughly enjoyed So Scrappy’s Rainbow Scrap Challenge (which I plan to participate in next year).  But what stopped me in my tracks and made me seriously consider really learning how to quilt is Quilt Diva Julie’s “Happy Happy Joy Joy”.  [Note: I’ve since edited the link to a post of hers that shows a newer photo which makes her squares that much more breathtaking.]  It will be a scrappy quilt based on Fabric Therapy’s X-Marks-the-Block block which, as far as I can tell, is based on all manner of string block patterns with a defined or contrasting middle strip.

I looked all around Julie’s blog and she has an amazing eye for color and value and design.  I ALMOST have enough skills to make a candy-centered string block like hers (I have to work on a real, consistent 1/4″ seam), but she’s also making quilts that I can only dream about.  She’s amazing and seems to sew so fast!

Anyhow, I’ll stop gushing about her and just say that a project like that is now on my list, as are a bunch of other quilt projects (including a couple I started last year and put away), which I’ll need to do before I tackle that one.

I also need a lot more fabric scraps, since I have barely any.  Those are steps one and two. 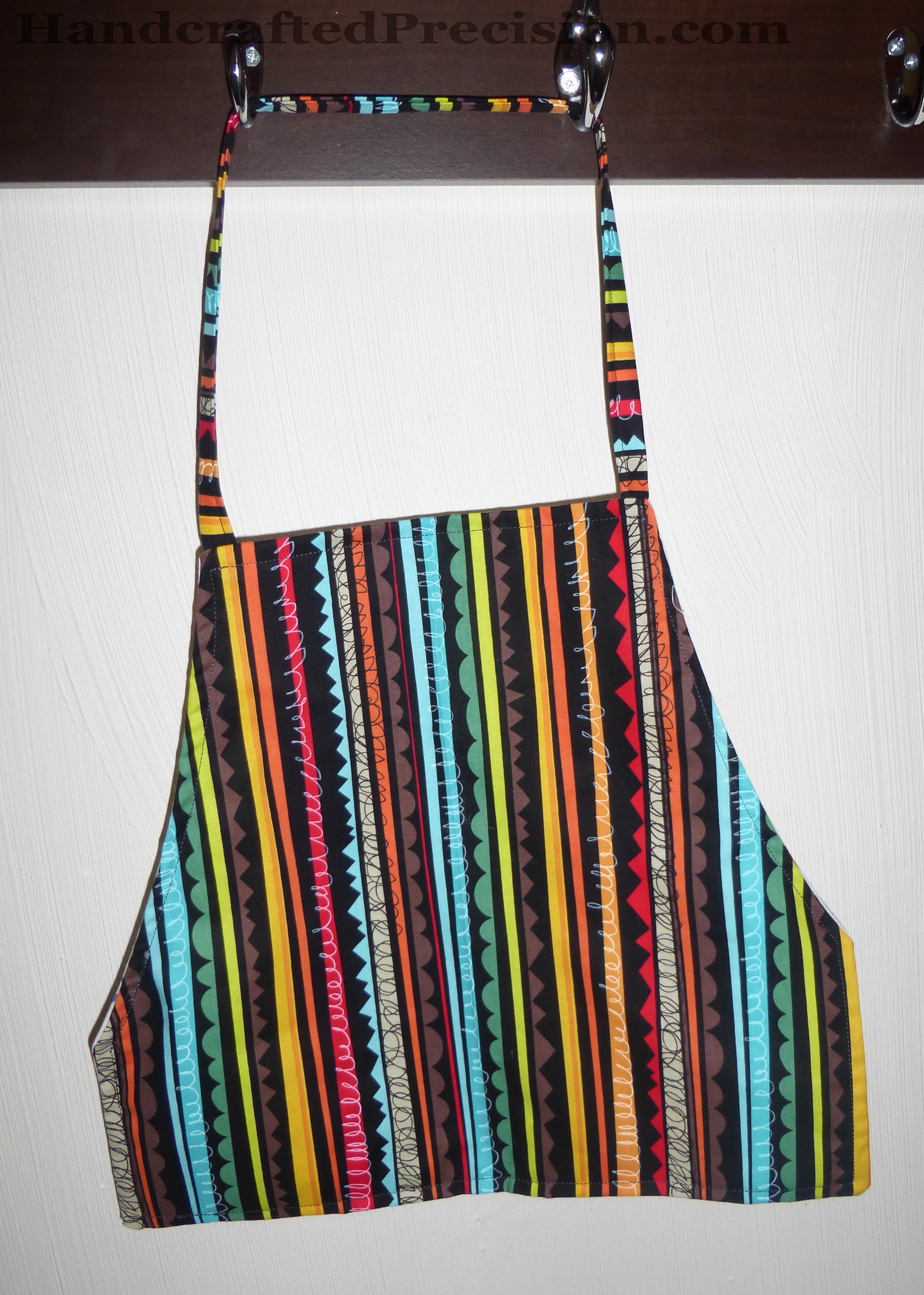 My toddler’s teacher asked me to make some aprons for the class.  (I’d volunteered my meager sewing skills, but expected she’d ask for easier things like place mats.)  They needed to not have any waist ties or neck closures and they didn’t have to be waterproof.  I asked if she had one I could trace and she did, so I was off to the races.

Except for the interfacing (argh, interfacing), it wasn’t hard to make.  I’m not big on ironing/pressing, so adhering the lightweight fusible interfacing (I used Pellon Fusible 906F) to the fabric was a pain.  I had to make a pressing cloth!  (I used part of an old sheet, which I’d cut up earlier in the summer for another project.)

I did enjoy shopping for fabric.  The local quilt store also enjoyed it, because I bought way too much.  I love love love the stripey print I put on the front.  It’s colorful and awesome for toddlers and shouldn’t show messes.  It’s also available on a white background.  It’s “Jigsaw Stripe Black/Bright” from the 10,000 BC collection from Benartex. 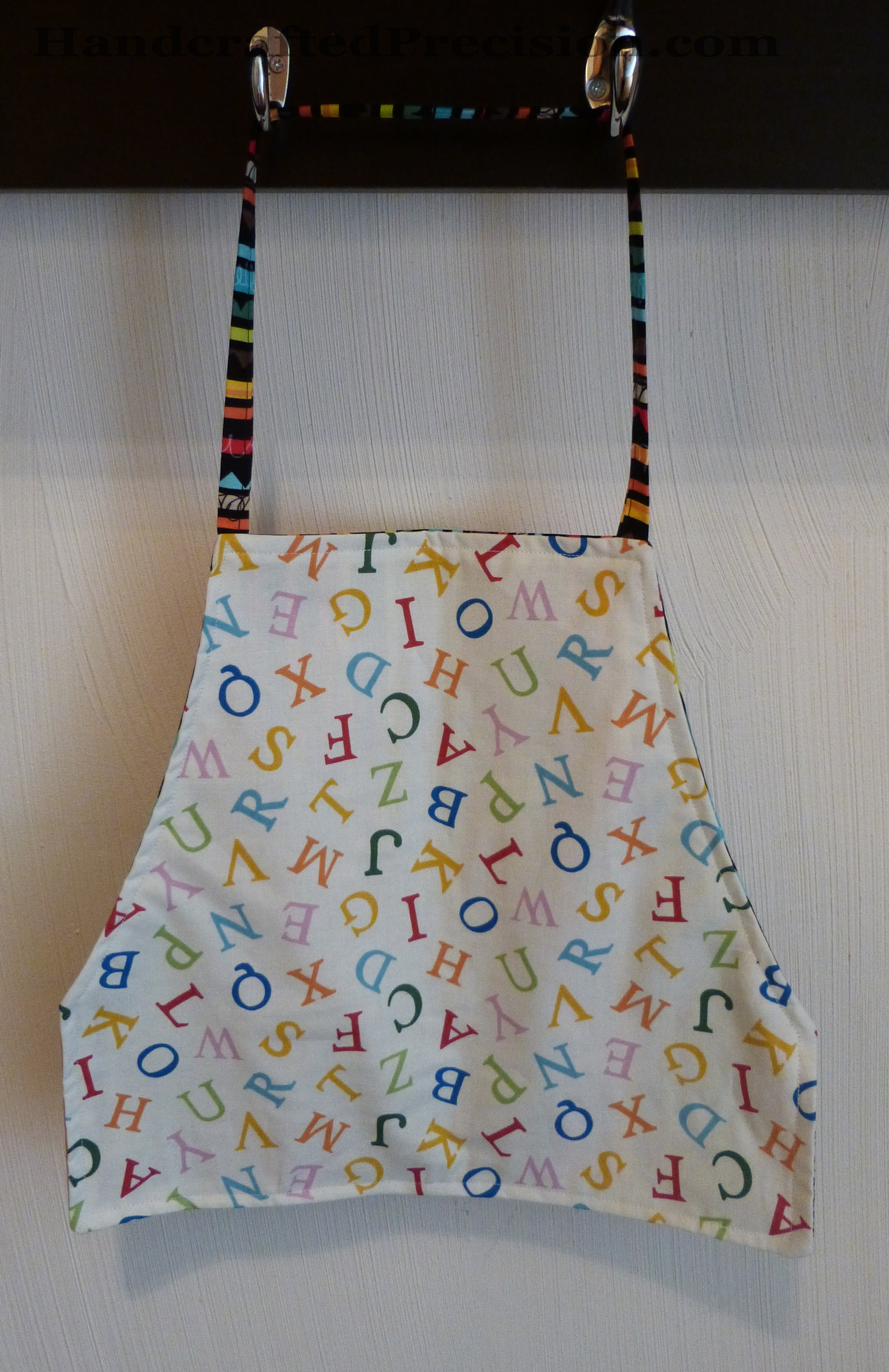 The back is a tossed letters print which I thought was appropriate for a toddler classroom.  It also comes on a black background.   It’s “White Letters” from the A is for Animal collection by Kathy Brown for Red Rooster Fabrics.

Here you can see that I failed in making it symmetrical.  I’m pretty sure this was a sewing error, as my pattern and cutting were much even.  I need a LOT more practice making consistent seams.

It went together pretty quickly, after the ironing was done.  I just stitched the neck strap closed after folding and ironing the ends in.  Then I put the apron piece with the stabilizer right sides together with the other piece, pinning the neck strap inside.  I stitched around, leaving space for turning, then turned, poked edges out (I need to do that a little better), then top stitched to close the turning gap and the make it lay flat all the way around.

It hung a little low in front on my toddler, but the neck strap was exactly the same length as the example one, so we’ll see what his teacher says.

So, here I am, starting a blog.

I’m going to focus mostly on sewing, with some quilting.  (And maybe some other stuff because I also knit, crochet, embroider, and make jewelry–but not lately.)  I dunno.  Let’s see how it shakes out.

I’ve been sewing way more than usual this summer, mostly practical things for kids.  For some reason, I want to share what I’ve been working on, but I don’t really have local people who care about such things.  I started following some awesome quilting and garment-sewing blogs and I got inspired.

I’m sure I’ll get to blogging about this summer’s finished projects eventually, but I’m going to start from my current project and go from there so I don’t get all bogged down in documenting what I’ve already done.

I’m a beginning sewer (and quilter), so this is a journey of discovery for me.