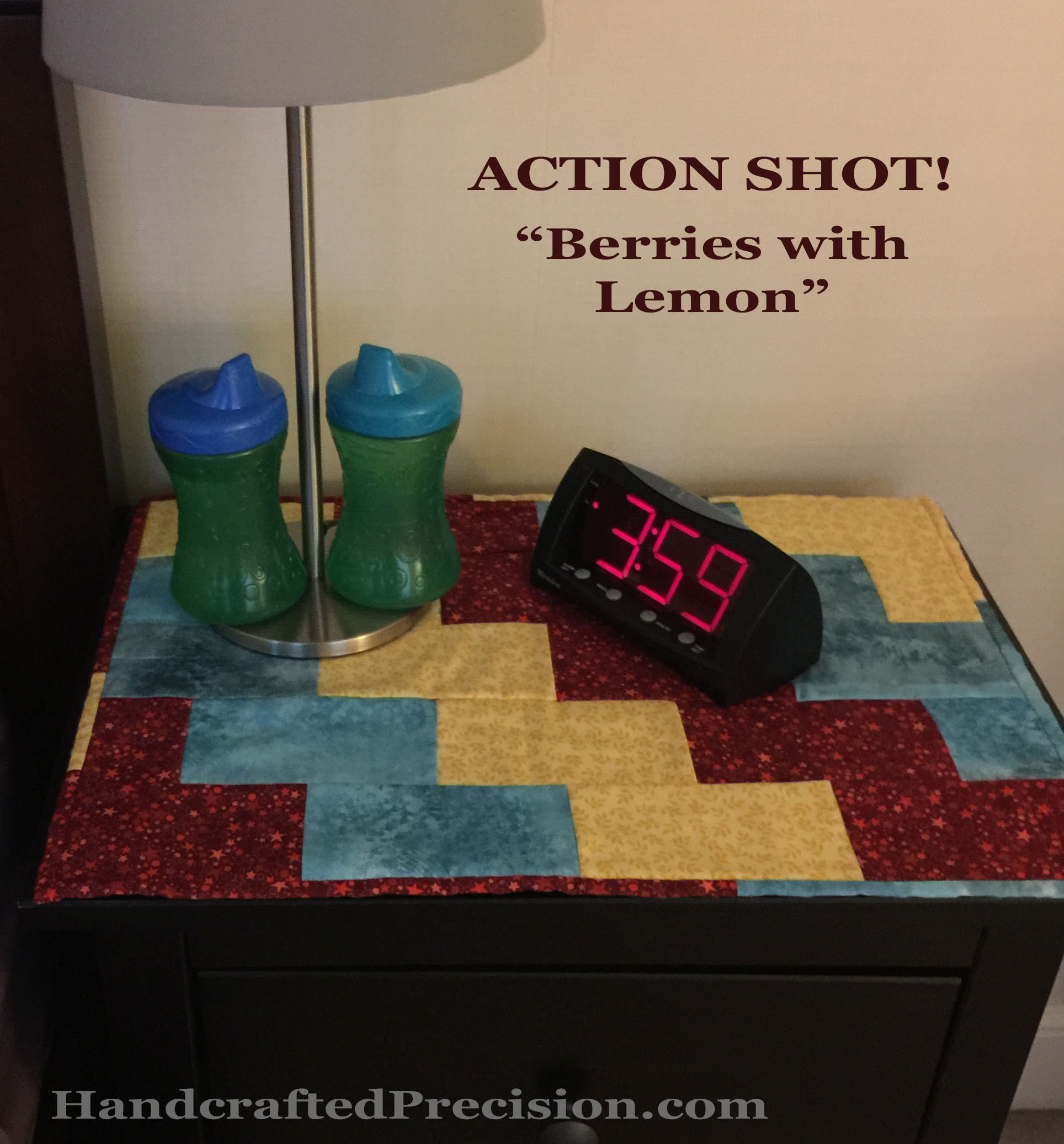 Done and in use, my first A Lovely Year of Finishes finish, the nightstand topper for my son Sec, “Berries with Lemon”!

It all started with his fabric picks and here we are with a functional piece. 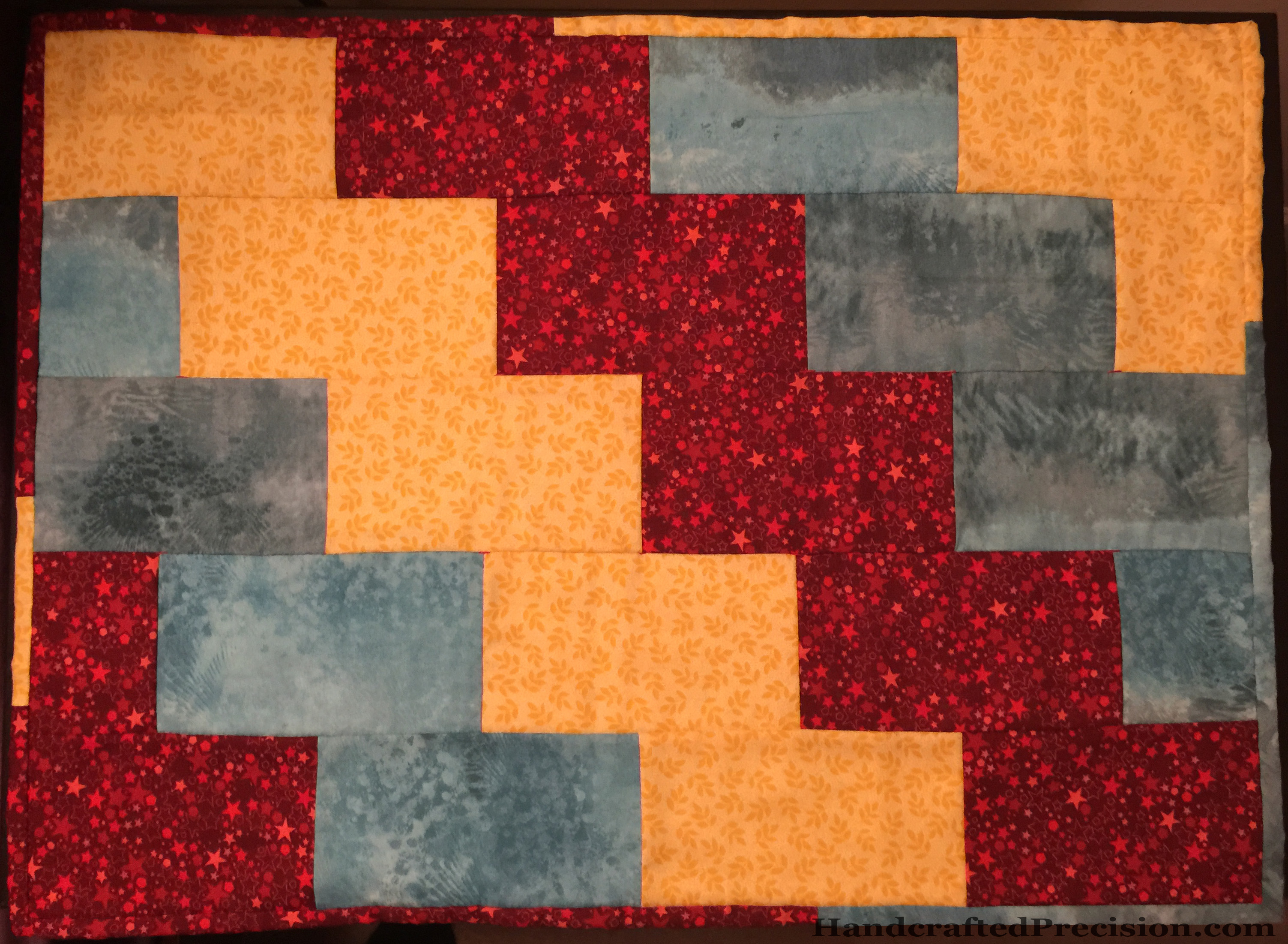 It’s a tiny bit wonky, but it almost perfectly fits his night stand.  I ended up just doing bar tacks at some of the brick intersections by hand.  It’s not going to be washed much (as you can see from the first picture, he doesn’t like putting his water cups on it), so it should hold together just fine.  No, he doesn’t really use the clock for anything.  He claimed it from another room and now it’s his.

The bar tacks were partly because I couldn’t bear to drag out my sewing machine to do the quilting.  I despair of ever being able to sew a consistent, straight line without a struggle.  Good thing I like hand-sewing now, though burying the knots and ends of all of those bar tacks was no fun at all. 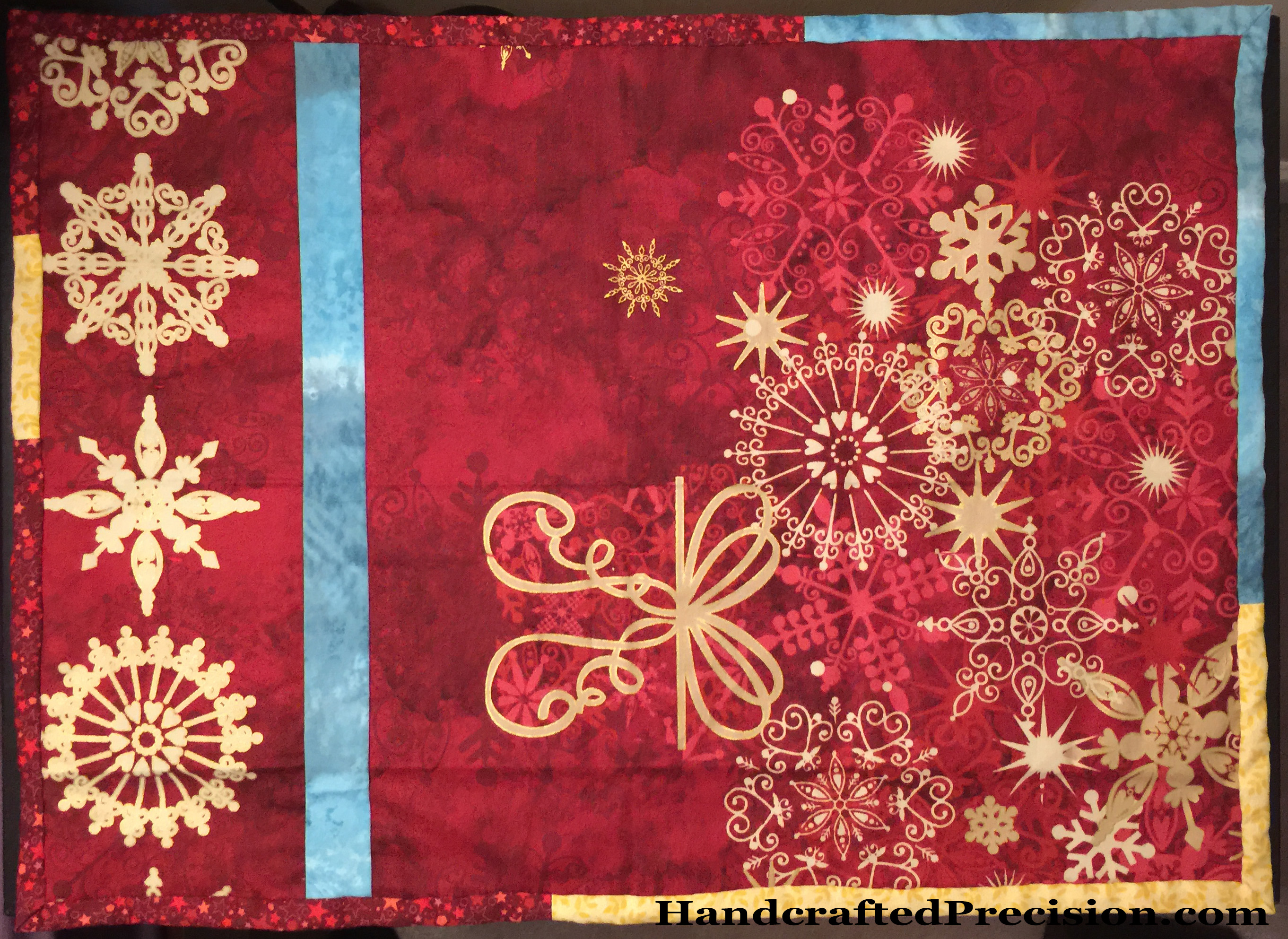 I do like the back.  I don’t want to mess it up with a big ugly white label and I’m not sure I can easily match the red for a Spoonflower-printed label, so we’ll see.

But it’s done and getting used, so YAY!

Linking up with ALYoF’s January finish post, just in time. 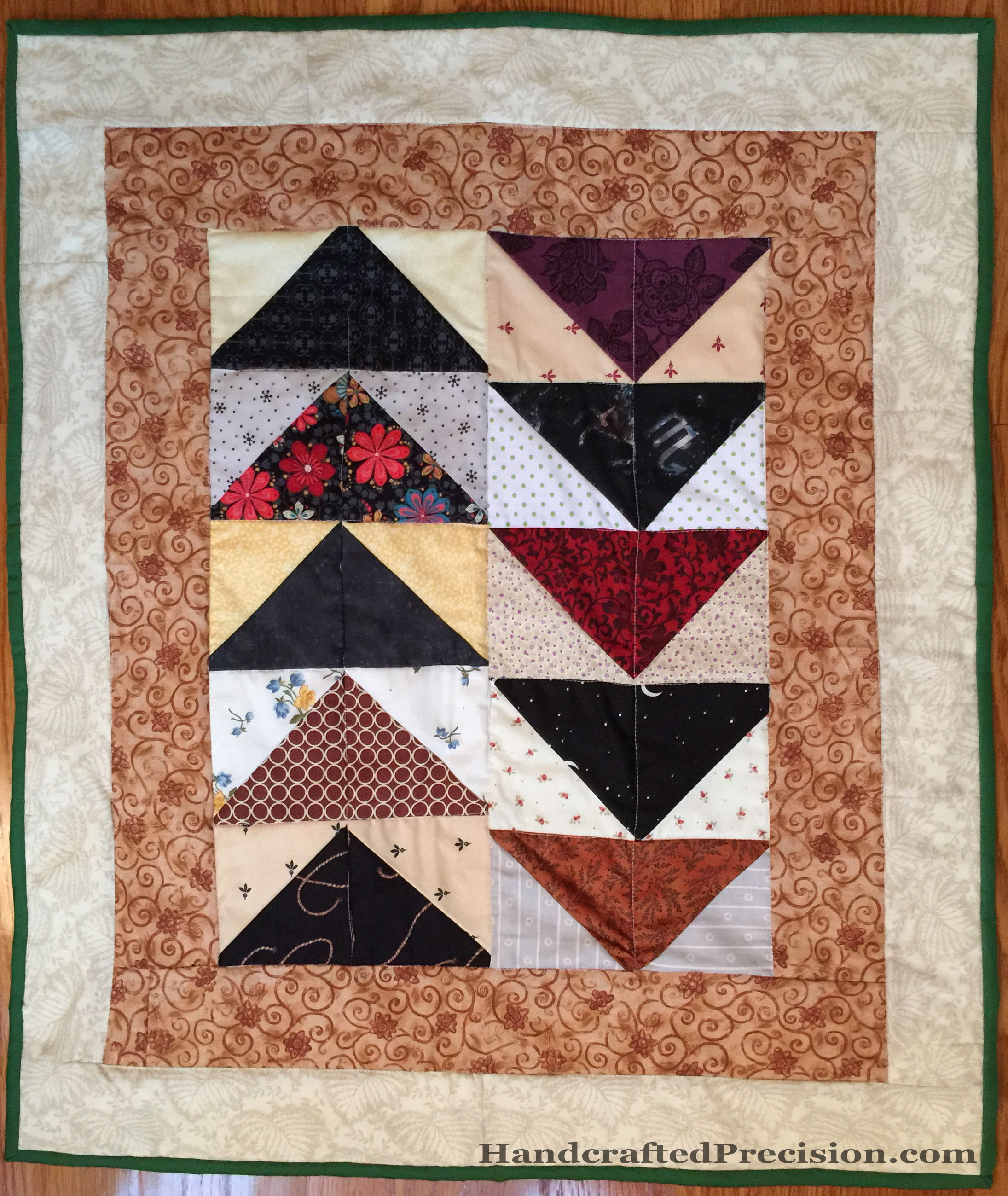 I took the scrappy flying geese from my second scrap class (that were supposed to become a table runner) and made them into a tiny couch blanket for my toddler, Sec.  He loves getting on the couch and spreading one of the knit or crocheted blankets I made over himself, but they’re all too big for him.  I wanted him to have something just for him, and those flying geese fit the bill.

As soon as I gave it to him, he ran to the couch, climbed up, put it over his legs, and smoothed it down.  So adorable!  The only sad thing is that it’s almost too small for him.  I need to make him another. 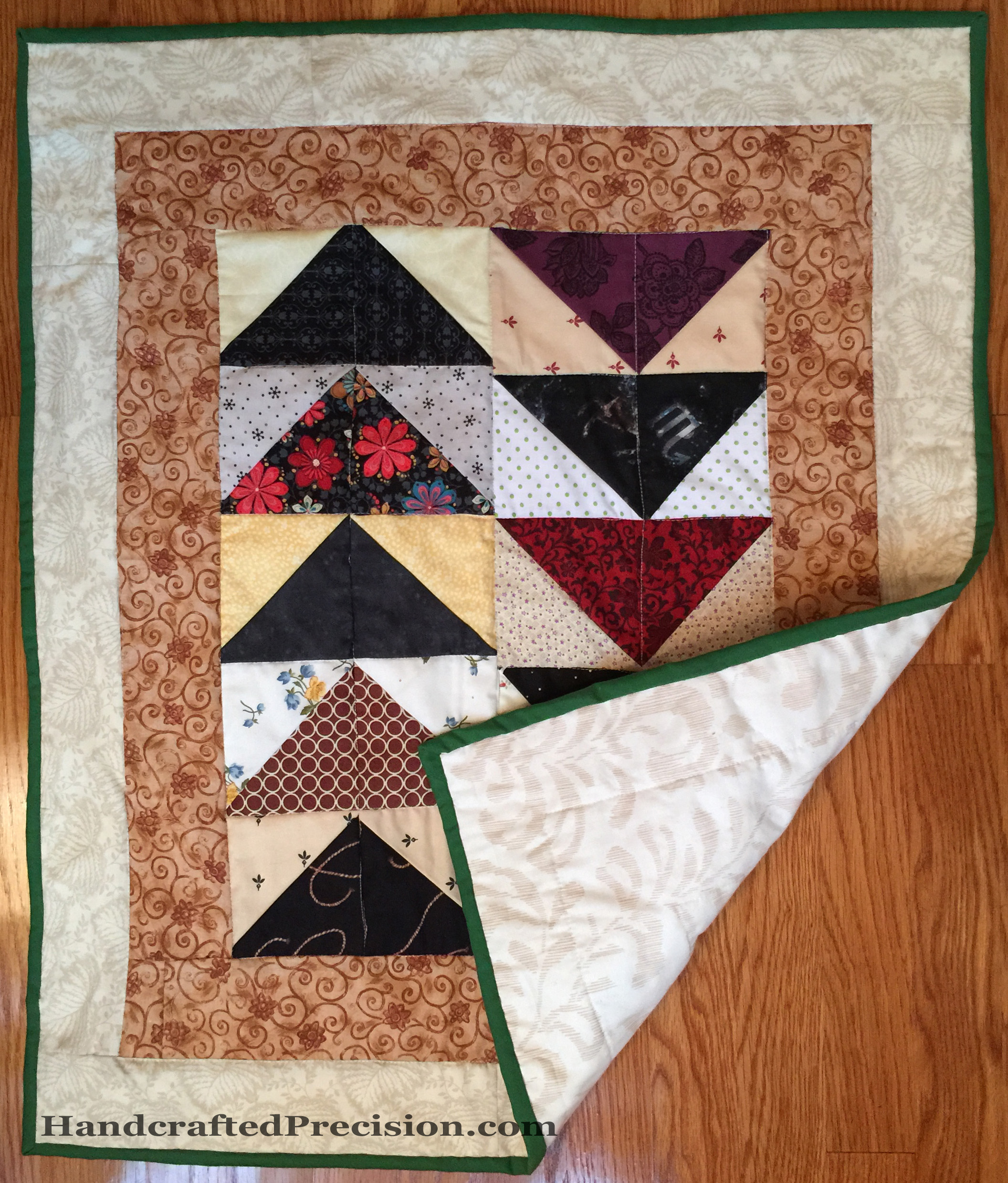 This was the first time I used Warm and White batting (instead of the polyester stuff) and it was amazing.  The batting itself actually felt like a blanket, as did the quilt when it was finished.  I don’t think I’ll ever use the polyester stuff again.  Yuck.

The two borders and the backing are from my eBayed scraps (yay!).  The green binding is leftover from binding another project over the summer, which I haven’t blogged yet.

I’m really happy with how the colors came together, and that I didn’t have to buy anything special for it.  I still need to make a label and sew it to the back.  I’ll have to do it when Sec is at school, since he wouldn’t even let me take it from him to measure it.  I had to wait until he was asleep.

Unfortunately, I learned that I don’t love machine quilting, even something so small.  I’ll give it another shot, but it’s not looking like something I’m going to do a lot of in the future.  Now I have to find a good long-armer.  Can you hire a long-armer to quilt something so small?  I’d guess yes, but I don’t know.